Also known as the “Suicide Forest” or “Sea of Trees”, Aokigahara is a dense forest at the northwest base of Mount Fuji, Japan that is a popular place to commit suicide, with about 100 people killing themselves in the forest each year. So many people die there that signs have been posted everywhere urging people to think of their families and calling a suicide prevention hotline. Every year, the police do sweeps to recover any bodies.

The notoriously silent and dark forest’s dense covering of trees creates an unnatural stillness that many believe is inhabited by spirits. Even before it’s current reputation, Aokigahara has long been associated with death, demons, and the angry spirits of people left to die there. It is rumored to be a place where ubasute—the practice of abandoning sick or elderly relatives to die—was practiced until the 19th century. It has also been said that the forest entices people to it with those suffering from depression sometimes saying that Aokigahara “calls” to them.

Scattered around the villages of Kabayan, Philippines, are ancient burial sites that hold remarkably well-preserved mummies. These “Kabayan mummies”, also known as “Fire Mummies”, were embalmed through a process that involved a salt solution and smoke that dried out the body, but unlike the mummies of ancient Egypt, none of the organs were taken out. While tourists can visit some of these mummies on display in their natural caves, many more can be found in the 200+ caves surrounding the area.

The three-level network of tunnels under Odessa, Ukraine, started out as limestone mines in the 19th century until stone mining was banned after the Russian Revolution. During WWII, Soviet partisans used the catacombs as hiding places. In 1980, the government decided to seal off the entrances but it wasn’t long before the catacombs became a popular place for exploration. Today, there are groups of explorers who would hold expeditions in the catacombs to document and map out the network.

One could easily become lost in the vast system of tunnels, wandering around for days in complete darkness if you lose your flashlight. In 2005, a group of local teens decided to spend new year’s night partying in the catacombs. But at some point in the night, a member of the group, a girl named Masha, became separated from her friends and got lost. She didn’t have a map or a flashlight, so she wandered around in the pitch black and freezing cold before succumbing to dehydration. A few months later, another group of teens came across her body but it was two years later, when police were able to locate her remains and finally remove it.

The 200-mile-long network of tunnels and tombs underneath Paris holds the centuries-old remains of over 6 million people. Throughout the catacombs, remains are arranged into neatly piled walls with decorative lines, hearts, and crosses made by embedding skulls in between the stacks of leg bones. In recent years, the catacombs have become the location of secret, underground parties including concerts and film screenings. In 2004, police discovered a fully equipped movie theater with a giant cinema screen, seats for an audience, projection equipment, film reels, a fully stocked bar, and a restaurant with tables and chairs.

5. The Island of the Dolls – Mexico

In the canals of Xochimico, south of Mexico City, you can find an island, home to hundreds of dolls hanging from trees and poles. Local legend tells the story of a man named Julian who found a girl who was drowned on the Island. He also found her doll floating in the canal, which he hung on a tree as a tribute to the girl. But Julian soon became haunted by the spirit of the girl so he collected more dolls to hang on the trees in an attempt to appease her spirit. After 50 years of collecting these dolls, Julian was found dead, supposedly drowned in the same spot where the little girl died. Today, the island is a popular tourist spot where visitors bring their own dolls to leave behind. 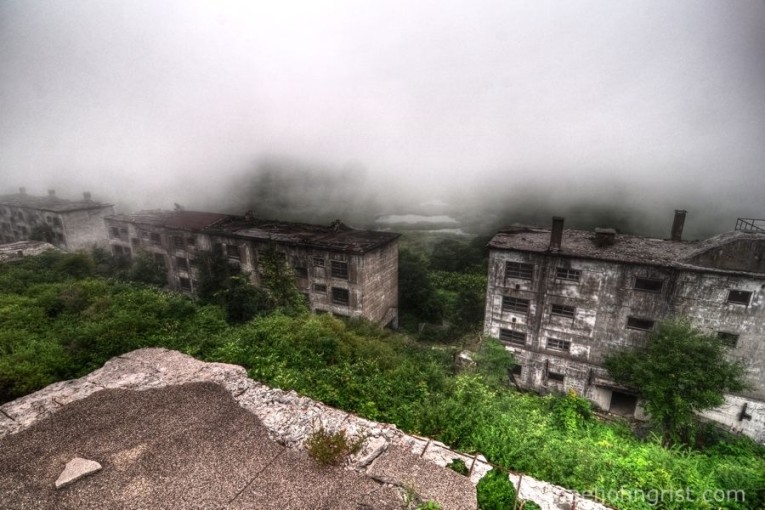 The Matsuo Kōzan used to be Japan’s largest sulfur mine until it was closed in 1972. The only thing that remains is the apartment complex used by the mine workers. This abandoned town, once home to 15,000 people, transforms into a scene out of a horror movie when the heavy mist that constantly shrouds the mountain swallows up the town, causing the buildings to seemingly disappear from sight. The mist is so heavy that people have spent hours and sometimes days on the mountaintop just trying to find the place. Once found, visitors can explore the decaying buildings of this ghost town, all while shrouded in a constant “Silent Hill” fog.

Off the coast of Sao Paolo, Brazil, is a small island home to some of the most venomous snakes in the world, including the Golden Lancehead Viper, which is said to have venom capable of melting human flesh. Scientists estimate there are about 4,000 snakes on the Island, with some reports indicating 1-5 snakes per every square meter. The uninhabited island is closed off to civilians, but it was once home to a lighthouse keeper who, according to local legend, died along with his wife and three children from the venomous snakes.

Also known as the Cave of the Crystal Sepulcher, or Xibalba by locals, this cave is the site of ancient Mayan sacrifices. So far, 14 skeletons have been found, 7 adults and 7 children under the age of 5, all with signs of blunt trauma to the head. They were most likely sacrificed in the hopes of appeasing their gods and bringing rain. Young females were important for these sacrifices, as they were seen as pure and uncontaminated. The most famous of these sacrificial victims is “The Crystal Maiden” who was a young woman, about 20 years old, believed to have been clubbed in the head and left for dead. Her complete skeleton can be found in the back of the cave, cemented, over time, to the floor in a layer of calcite.

Leap castle is said to be one of the most haunted castles in the world, with a horrific history of gruesome deaths. One of the most famous ones occurred in the 16th century, when a dispute over leadership of the Ely O’Carroll clan led ‘one-eyed Teige O’Carroll’ to storm into what is now known as “the Bloody Chapel” during a celebration of the mass, and plunged a sword into the back of the priest, his older brother  Thaddeus. Another was the massacre of 40 men of the McMahon clan. They were hired by the O’Carrolls to train them in new methods of warfare and during a feast to celebrate a victory over a rival clan, were poisoned by the O’Carrolls so as to avoid having to pay them.

The Zoroastrians believe that all elements are sacred and that when a person dies, evil spirits rush in to contaminate the body. So burials on land or sea or cremations are unacceptable. Instead, they hold open-air burials, leaving remains on a raised, circular structure, known as a Tower of Silence or dakhma, exposing them to the sun and to scavenging birds. One of these towers that are still being used today is located in Mumbai, India. It’s considered holy land so it’s closed off to any visitors, but from the many high-rises surrounding the small forest, you can see the tower from a distance. This particular Tower of Silence has been the subject of a popular hoax that told the story of a group of Indian officials’ mysterious encounter with the place.

Most 6 Beautiful Places in Tennessee to Visit

Visit 11 Most Beautiful Towns In America

Most 10 Places To Visit In South Africa

Android App Development – Assuring a Stable and Productive Career in IT